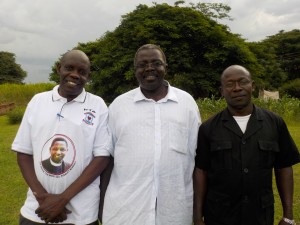 In 1961 over 50 years of work was completed with the publication of the Bible in the Ateso language. That was a great achievement, as the early missionaries firstly needed to learn the language from the Iteso people and then use the roman English alphabet to write this down. The impact of their work cannot be over-stated. To give the Bible, which is the Word of God, to someone in their own language is probably the most powerful thing you can give them.
After 54 years of using the original translation, the Uganda Bible Society agreed that it was time for a revision. Despite the great work of those early missionaries and their Iteso partners, some unintentional errors occurred. These mainly centre on the use of English, rather than Ateso grammar and sentence structure. Also, as with all current languages, the use of words change over time. This has made the existing version of the Bible difficult to understand for a new generation of Ateso Christians.
The work has already started, with a team of 3 clergymen (2 Church of Uganda and 1 Roman Catholic) beginning to revise Matthew’s gospel. They are doing this by comparing the current Ateso Bible with English versions (Revised Standard and Good News), and looking at the meaning of words in the original Greek and Hebrew Bible languages. Through this process they are aiming to complete an Ateso version of the Bible that is both accurate and readable.
The Ugandan Bible Society is taking the lead in the project, and have provided the team with the necessary laptops, software and training. TDT have agreed to work in partnership with them by financing office space for the team to work. Other major denominations are also involved through having representatives on a managing and a reviewing committee.
They have set a goal of completing this by December 2022 and are currently about 65% finished. The hope is that many more Iteso people can be helped through having God’s Word in their own language.

Updates from the Bible Revision Team