Providing emergency food and shelter when disasters and emergencies happen.

Teso Development Trust came into being to provide relief for the suffering Teso communities during the insurgency of the Karimojong form 1986 to 1991. It resumed the task in 2003/4 when the area was hit by the Lords Resistance Army incursion, helping to provide emergency food aid, water and sanitation to the thousands who were displaced. Following this it funded resettlement of thousands of people who had been housed in camps, helping re-establish homes and crop growing. 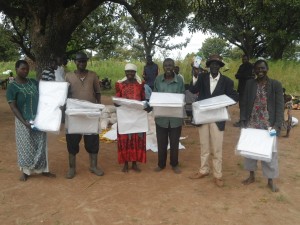 Emergency shelters being given out

Since 2007 the area has been hit by the impact of climate change which has meant an irregularity of rainfall and drought. In 2007, 2010, 2011, 2014 and 2019 this has resulted in major flood emergencies in the northern regions of Katakwi and Amuria and around the lakes in Kumi. This has resulted in:

TDT has responded over the years by funding food relief, water purifying tablets, mosquito nets and emergency shelters for the affected communities through its Church partners, targeting aid on the communities most damaged and particularly helping the elderly, disabled and child-headed households. In 2019 £7505 was sent out to support communities affected by flooding with emergency food supplies, tarpaulins for drying crops and seeds for replanting once flood water receded.

We expect that in the future this instability of rainfall and drought will continue exacerbated by the fact that the majority of rural communities live below the poverty line (surviving on less than one dollar a day) and are entirely reliant on rainfall for watering their crops.  The Trust therefore plans to keep a reserve of funds specifically for emergency relief response as well as working with its partners and others to improve local resilience to the change in weather patterns and building knowledge of Disaster Risk Reduction strategies in order to find a more long term solution to the problem. It has been observed that villages which have benefitted from training in improved agricultural and livestock husbandry techniques and that have established Village Savings and Loans Associations in place have not been quite as hard hit by adverse weather conditions or other emergencies as communities that haven’t yet benefitted from this training.

Emergency Relief in Okerai A