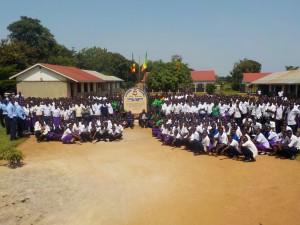 Ngora Parents Secondary School has had a long partnership with St. Peter’s Church, Ruddington (near Nottingham) and TDT. Over the years, St. Peter’s in partnership with TDT have built class-rooms and a school hall, and have provided many educational resources. In 2015, with support from the British and Foreign Schools Society, a new dormitory building has been completed and is now housing 105 girls. This is driving up academic achievement, as those who board are able to focus more fully on their studies. When students live at home they are often required to do many chores both before and after school, and live in small houses with no power. The result is that students are tired at school and have little time to do homework. Those who board are also less likely to drop out of school. One of the girls at the school, Sharon, explained that “A good and comfortable home helps us to stay in school”. Harriet also commented that “Power at night gives us chance to read.”
The reputation of the school for providing high-quality education in the area 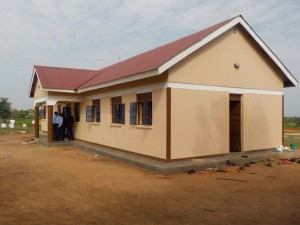 , which now includes sixth-form, has created rapid growth in student numbers. The success of the school and itself ability to now fund its own development has been so marked (the school now has over 1000 pupils) that following the TDT annual visit in 2018 it was felt that the school had reached the stage where it could be independent and TDT could shift its focus to other schools which would benefit from a kick-start in the same way.