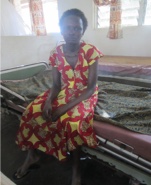 Dinah Asekenye (living positively with HIV) got admitted to Kumi Hospital in February 2019 with labour pains that had been with her for the last 2 days. Dinah was rushed to theatre to rescue her and the baby, unfortunately the baby girl died. Dinah’s husband abandoned her when she was 2 months pregnant and is now living with another woman. His relatives chased Dinah away back to her parents so there was no-one to help her pay the medical bills. On discussion Dinah and her parents were able to raise 100,000 UGX (£21) towards the costs and the remaining 337,800 UGX (£70) was provided through the Compassionate Fund. 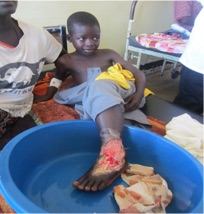 Mary Kantono, aged 9, was bitten by a poisonous snake on her left leg at night while she was sleeping. Her parents rushed her to the traditional healer who couldn’t offer a solution and so they took her to Ngora Health Centre 4 where they were also not able to offer treatment and referred her to Kumi Hospital, by this time with a gangrenous wound on her left leg. The medical team from the surgical ward intervened and she improved after 3 weeks of medical treatment and was d 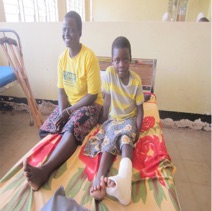 ischarged. Her medical bills came to 1,111,100 UGX (£230) and the family through selling the only piece of land they had managed to raise 1,010,000 (£210) in cash. The balance of 101,100 UGX (£20) was transferred to Compassionate fund. The family thanks the donors of the Compassionate Fund for helping with their daughters with bills.

Lilian Akello aged 4 was referred from Kapir Health Centre to Kumi Hospital with an ulcer on her right toes. Skin tests all showed negative results, including those for leprosy. Lilian was put on medication, the ulcer was dressed and an ankle-foot shoe with support fitted. A biopsy was done to rule out cancer. Lilian is under the care of her grandmother as her mother is battling with liver cirrhosis. Her father left making it tough to meet Lilian’s medical bills of 145,000 UGX (£30). Their family thanks Compassionate fund for helping Lilian with the costs of the Lab investigation, medication and AFO shoe.

Tweet
Share
Pin it
Previous Story“God has surely turned our tears and despair to a life of joy and hope” Next StoryHow a new borehole has transformed our lives – the testimonies of two women from Apopong.