In spring 2021 the Teso region experienced further issues with lack of rainfall, leaving the expected harvest in June more or less dried up in the fields. Households that had formerly lived off 3 meals a day were having just one meal and the elderly and disabled or other vulnerable groups hardly had anything at all. The situation was made worse by inter district lockdowns because of coronvirus, meaning access to markets and food supplies other than that from their own fields was not an option. As a result the costs of food also rocketed. Hunger had a general knock on effect of causing a rise in domestic violence, prostitution (as women tried to earn money to buy food), malnutrition and petty theft as a means to make a living.

Farmer with withered crops in Okerai A

In August TDT sent £2175 to our partners in Amuria to help relieve the situation and 1500 KG of posho, 750kg of beans and 250kg of black eyed beans was distributed to the elderly and most vulnerable households (such as those living with HIV, People Living with Disability and child headed households) in the community of Okerai A.

As a direct result of the distribution women and girls said they were better able to concentrate on the necessary vegetable garden work that would enable them to have something to harvest in the next season. There was also a reduction in the rates of violence and sexual exploitation within the community.

The long term plan over the next 2 years is to support Okerai A with the training in farming techniques and establishment of Villages Savings and Loans Associations that its neighbouring villages have benefitted from and which will make the community overall more resilient to disasters. 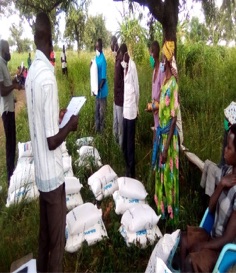 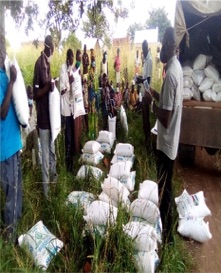