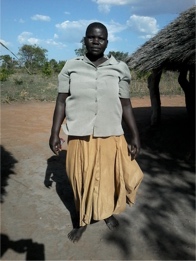 Testimony of Selina Ajebo, 52 years old and wife to Robert Apendu with 8 children from Apopong village.

I and my daughters like all other women in the community used to walk long distances in search for water under a very hot sun. In the wet season we would go to the swamps to collect water walking past dangerous snakes in the bushes. Due to the long distances and long queues in the water points collecting water took a long time and I often used to go to the nearby borehole at 4:00 am only to return home at 1:00 pm, often to a very angry husband. Quarrelling became normal; to me it was like every time I visited a far borehole I could come back home for a shouting match and my husband would often beat me. At the borehole women would often fight each other in the attempt to collect water to avoid being attacked by their husbands. Water during the dry season is scarce and I preferred collecting water for drinking and cooking only, collecting water for washing clothes and bathing only infrequently. In the wet season, children washed using the stagnant water collected in potholes. I thought of divorce all the time and wanted to go back to my parents as a result of hard life in my family. In our community the school pupils had no water either and neighbours to the school were troubled by the endless number of pupils visiting their houses in a search for water. I am fighting to remove from my memory these horrific experiences. But God knew his right time. This place has a nickname “Achan Pii” which literary means a place with no water but this borehole has challenged that myth and I am a very happy woman. PAG-KIDO and Teso Development Trust you have made me proud. May the Almighty bless the work of your hands.

Testimony of Helen Apilla, a widow of 45 years with 8 children, and a resident of Apopong village.

Our water situation used to be horrible, our community had no wells and people used collect water in the swamp area. Since I was married I have never seen a borehole in this area. We became friends with frogs, lizards, snakes and cattle as we all shared the swamp water with each other. One day I remember cooking with the same water I had used for bathing my child. After bathing the child I re- boiled the water for food. One time I went for a whole week without bathing. I was treated for typhoid several times. Some people left the village because of the water problem. I did not like being a woman because when you gave birth nobody would bring you water for cleaning yourself and in most cases women would smell. Most of the time when I was in this situation I never wanted to be next to people for fear that they would get a strange smell from me. People lived like animals and sickness among women and children was rampant. We lost many lives to waterborne diseases because of the dirty water. Our children also missed school constantly as the teachers would send them away if they smelled because they hadn’t bathed for a long time.
One day the women held a day of prayer and cried to GOD for whole day asking ‘God why have you abandoned us?’ I believe the answer has come at the right time. I am happy because I have witnessed the change from water scarcity to water abundance. That’s why I suggest the name of this borehole to be God’s Grace. Thanks PAG-KIDO and TDT for being our heroes. To God Be the Glory.