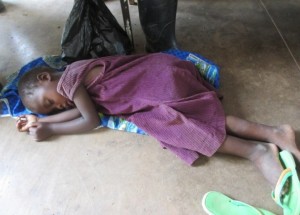 Joan with a fever before treament

Joan, aged 3 years came to Out Patients Department with Aneamia and bacteria infection. The father Ogelo Vincent from Aakum Morio Ongino had brought her to hospital with a history of nose bleeding, fever and weight loss. Several treatments were done at the local health centre without any change. They did all the tests that the Clinical officer had requested. After they had done the tests, they had no more money for treatment. The team on the Compassionate Fund decided to pay for her treatment since she had Aneamia that causes many deaths in children.