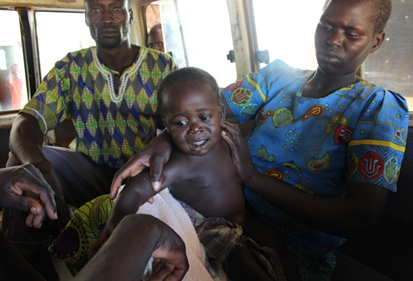 While being fed breakfast by his mother, John Michael choked on his rice and fish and inhaled some of the food into his lungs, including a fish bone.
Okuku began coughing and had serious breathing difficulties. He was rushed to Kumi Hospital and given treatment which stabilised him for an hour. His condition then worsened and the doctor referred him to Mbale Hospital (55km away) to see the ENT surgeon. He was driven immediately to Mbale using the Kumi Hospital vehicle and the fishbone was removed from his lung. Okuku is now fully recovered.
The Kumi Hospital Compassionate Fund paid 15,000 UGX consultation fees and 86,000 UGX transport fees, £25 in total, and guaranteed the surgeon’s fee. Okuku’s parents sold their cow and paid the 300,000 UGX surgeon’s fee at the government Mbale Regional Hospital, the cost of an emergency procedure.
The Kumi Hospital Compassionate Fund impressed that petty cash reserve was immediately available to both fund and guarantee the emergency transport and treatment. Okuku would have died without this cash being available.

Tweet
Share
Pin it
Next StoryJoan’s family couldn’t pay for her treatment: the Compassionate Fund met the need!