My name is Mrs Angela Atim, a resident of Olobai community in Kapalebyong district. I am married to Mr John Eumu and we have been blessed with 11 children (5 boys and 6 girls). We have been practicing vegetable production for over 4 years but with limited knowledge of how to cultivate properly and we only cultivated the land during the rainy season because of the lack of water during the dry season. We were challenged by competition from other farmers as the rainy season is when everyone grows vegetables and disease (especially in the tomatoes in the rainy season there is too much water for them). In the dry season we would grow vegetables but only on a small plot of land because of the long distance to the closest water sources and because even those water sources were shared with livestock. The animals would frequently find their way into our gardens. 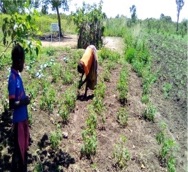 Angela observing damage to her tomatoes

However, since PAG KIDO, supported by TDT, came into our area and drilled a borehole which was not only very high yielding but also near our house we have changed our routine of growing vegetables (as we now have a clean water supply readily available) and are growing predominantly in the dry season with just a little in the rainy season. This decision has increased out income from vegetable production. As part of the project we were also trained on various vegetable growing techniques for example; pest and disease control in tomatoes, cabbage, onions, watermelon, eggplants and others, nursery management and the transplanting of seedlings, main garden preparation and care of the crops at the main garden. By putting what we have learnt into practice we have been able to increase our yields and as a result our household income; which has earned me more respect from the community. My household now has a steady monthly income of UGX 250,000 per month (approximately £55) from vegetable production. Asa result my savings per week at Itunai VSLA (Village Savings and Loans Association) group, of which I am a member, has increased and my fellow women are able to do business within the community since some of them buy vegetables from me and sell them to the trading centres. The community of Apopong also decided to establish a local trading centre at the borehole site, as it is an easy central location for all households, where people can buy and sell commodities like meat, silver fish, tomatoes, onions and chapati and it serves as a daily market for the community. 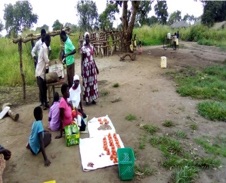 Some women are now emulating me and have asked me to train them in vegetable production which is something I am very happy to do so that we can all jointly improve our household income. For a long time there was no VSLA group in the community but the project encouraged us to start and now we are happy we are able to save some money. When you need financial assistance, it is now rarely necessary to sell your livestock or food items because you can borrow from the VSLA group and pay the loan back as the number of livestock increases. Medication is also easier to access as the VSLA offer loans with no interest when they are for medication.

Our increased success at growing vegetables meant that the community trusted us to manage money well and decided to nominate me to the Water User Committee. This nomination gave me the opportunity to receive further training in hygiene and sanitation, record keeping and tree planting to help me succeed in my role. By putting into practice the knowledge and skills I attained the sanitation in my community and in my home has greatly improved.

Previously, due to the long distance to and from the water point, I used to wash once a day or sometimes not even that frequently because I would get tired of going to the water point. But now since the borehole was drilled in our village my friends and I now wash 2 to 3 times a day or as often as we need to. We have also put water in a tip tap (device for hand washing made from a plastic bottle) near the latrine so that we can wash our hands. Before we never did this as it was considered a waste of the water we had collected. Now with COVID we are all trying to wash our hands more frequently and the community members find it easy to put water at the entrance of the home since the water source is easily accessible and even children can safely go and fetch water from there. The need to boil water for drinking has also greatly reduced to less than 5% in my village.

Angela Atim is proud of her pit latrine

We used to collect water from the next village and this would make the queues at the borehole very long and so women would be delayed as it was the only borehole near enough to reach . This meant that domestic violence was common but ever since the borehole was drilled in our village we have not yet registered any domestic violence cases related to water.

I can confidently say we are now increasing our investment in livestock and other commodities. Our success in this family is not by chance but by prioritising the things that are valuable to us says Angela. God has raised up out of poverty through the provision of safe clean water.