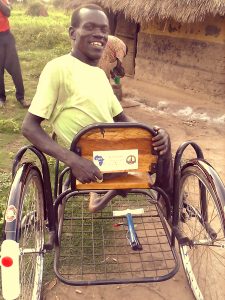 Nathan Ewalu, 43 years old, is married with 6 children. He was identified as one of the vulnerable community members in Angorok as part of the seed distribution project done in partnership with BIDS Foundation. On receiving the wheelchair, Nathan, popularly known as ‘Nasoni’ by the locals was speechless and surprised. He was grateful that though he had never asked to be given a wheelchair God had used the visiting TDT Team to bless him with one.

He then shared with TDT that when he was young and in primary school his family had been poor but had agreed to sell a piece of land to provide some much needed money and to procure him a wheelchair. However his elder brother, given the task of purchasing the wheelchair, had chosen to use the money to pay for the dowry in the marriage of his son instead. He had become bitter against the brother and had given up hope of ever acquiring a wheelchair. Up to this time he had had to move using his hands through muddy ground often over places where people had even defecated, being attacked by cattle tied along the paths and being unable to take his children to the health centre because he lacked the money for a motorcycle. 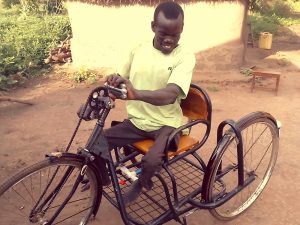 With a wheelchair Nathan can now carry products to the market for sale. He will no longer have to drag himself through filth and he can use the wheelchair to carry his children to the health facility. He gives thanks to God for the wonderful blessing of a wheelchair. 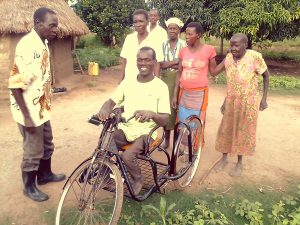